Sunday 23rd September saw 22 of Arabian’s gymnasts make the long journey to Colchester, Essex. With over a 2 hour journey from Milton Keynes to reach the venue, some competitors and coaches took it upon themselves to stay over the night before. With an early start on the Sunday morning, it would be well worth it.

The first round of the day saw 11 gymnasts compete for Arabian. All the gymnasts had worked so hard in the lead up to the competition and considering they were up against gymnasts that more than likely train double the number of hours they do, they all held their nerve and showed the crowd what they are made of. 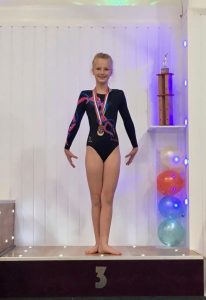 The first age group saw Eve Bailey, Molly Gregory and Emily Penwell competing against 23 other gymnasts from across the region. Eve claimed a bronze medal the bars for well-executed routine, for Molly and Emily they feel just short of medals. In Molly’s first ever competition she got the 8th place on vault and a 9th place on bars. Emily again fell just outside the medals and was so close with a 6th placing on both bars and beam. However, out of the 23 gymnasts, Emily came 10th overall which is a huge feat.

The next age group was even bigger with Phoebe, Liliana, Klara, Gracie and Elise competing against 25 gymnasts. Again they had a tough battle, but they still picked up medals. Phoebe Bettney showed her best pieces were Vault and Bars with a 6th placing on both. Liliana Oshodi stole the show with a gold medal on Trampette with an acrobatic somersault she clearly deserved the top prize. Klara Qabaha’s elegance showed on her bar routine as she claimed the 9th place, but even better on Trampette she took 5th place, just outside of the medals. Trampette was clearly Arabian’s piece as Gracie Frame showed with a 7th place finish on the event and an 8th place on bars. Finally, special mention to Elise Hewer who performed brilliantly, however, took a slight 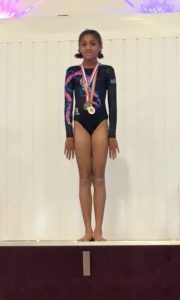 tumble on her floor exercise and unfortunately broke her elbow. Coach Elliemay sorted her out and quickly got her taken to the hospital. Having said that, before the fall she managed to get 10th place on the balance beam.

The final age group in this round saw the 3 eldest in Madeline James-Bowen, Molly Clarke and Caitlin Gannaway. Not as big an age group as the other but still competing against 18 other gymnasts is a big task. Madeline got a silver medal for her tumble along with 2 bronze medals for her powerful trampette and vault exercise. Overall out of the 18 gymnasts competing with her Madeline came a fantastic 4th place. Molly had a strong beam exercise falling just outside the medals with a 5th place finish along with a 6th place on trampette. Caitlin showed her strength and flexibility in the range and conditioning exercise with a 9th place out of the 18 gymnasts.

The second round of the day saw our youngest gymnasts in Freya Powis, Lily-Mai Griffiths, Sienna D’Souza, Jenitha Johnson and Flic Smith along with Caitlyn Voong and Lyla Clark. 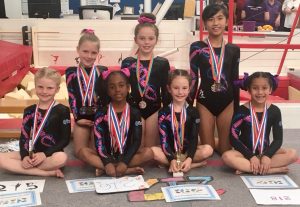 Jenitha stole the show with medals on 5 out of 6 pieces of equipment. She got a gold on tumble, silvers on vault beam and range and conditioning and a 4th place on bars. Jenitha had a slight fall on her trampette exercise which lost her the overall gold medal, but still coming second out of 11 gymnasts is something to be proud of. Lily-Mai and Sienna finished back to back overall with Lily in 4th place and Sienna in 5th. Lily picked up 2 bronze medals for elegance on the bars and the beam. Sienna took the gold on the balance beam for a well-executed exercise showing exactly what the judge was looking for. Freya picked up a 4th place medal for her trampette showing height and control in her full turning jump.  The next age group was slightly smaller for Flic Smith, where she showed her power and determination. Flic picked up a silver medal for acrobatic tumbles along with the 4th place for her artistic bar routine. The 2 eldest in Caitlyn Voong and Lyla Clark were in a large age group of 17 gymnasts where they had to show what they were made of. Caitlyn came 13th and took 9th place on bars, Trampette, and her  R&C routine. Lyla came a fantastic 8th out of the 17 gymnasts competing, with her best scoring exercise being tumble getting her the 5th place. Lyla also got a 6th placing for her range and conditioning. 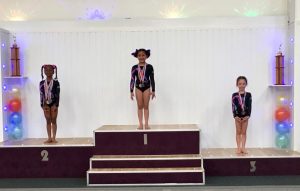 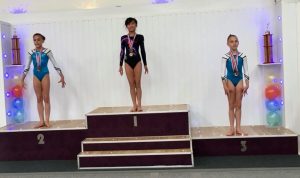 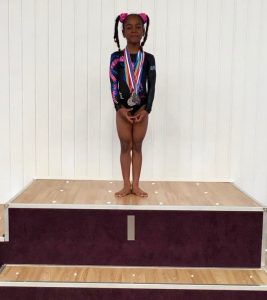 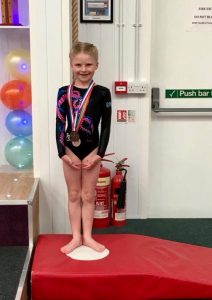 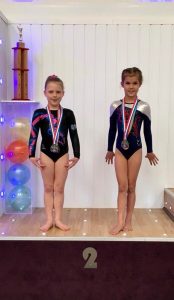 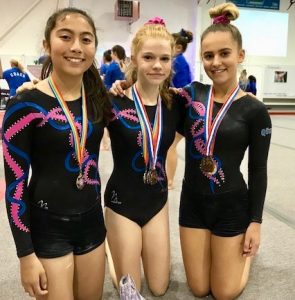 The last round of the day saw Tallulah Couper, Alysha Howton and Natalia Andrzejak follow on from their teammates success. Tallulah was up against 14 other gymnasts and came a brilliant second overall, with a silver medal on bars and beam and fourth place on range and conditioning. In the hardest level, Natalia got a fourth place for her powerful trampette and elegant bar routine, with Alysha falling just sort of getting a medal with a 5th placing for her artistic bars. 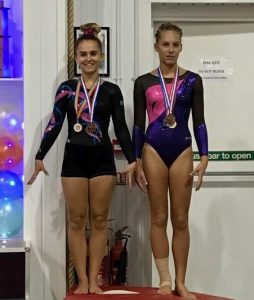 Thank you to all the parents that made the long journey to the venue and also to all 6 coaches in Sammii, Vicki, Elliemay, Irene, Kyla and Hannah that made the journey to the competition to support their gymnasts. They all have played a fundamental part in making sure the gymnasts were ready for the event.