On the eve of bonfire night, gymnasts from across the country took to Milton Keynes Gymnastics facility to take part in the second Codebreakers Invitation. As the evening approached and fireworks started across the city, the gymnasts proved that it didn’t need to be bonfire night to have fireworks.

24 gymnasts from Arabian took to the stage, after practicing their routines for weeks on end it was finally time to show their parents what they had been working towards. 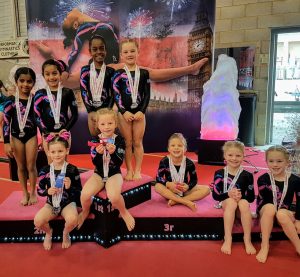 The first round saw the youngest gymnasts compete in Grace Manley, Olivia-Rose Crossin, Verity Fraser-Reynolds, Jenitha Johnson, Sienna D’Souza, Freya Powis, Tilly Clark, Anchal Purohit, and Caitlin Gibbons. For 3 gymnasts this was there first ever competition for Arabian outside of the club. 5yr old Grace came away with 3 gold medals, Olivia-Rose took the whole package in claiming 2 golds a silver and a bronze and young Caitlin took gold on the trampette. For the more experienced gymnasts, this style of competition put them at ease and it showed. Jenitha wowed taking away 5 gold medals, a clean sweep. Verity took home a gold for tumble and 2 silvers for her beam and bar routines. Sienna claimed 3 silvers on trampette, beam, and bars along with a bronze on the vault. Freya took home a bronze medal for her trampette after falling ill the week before. Tilly took gold her the vault along with a silver for the trampette and Anchal showed the beam was her piece as she took the gold medal.

The next round saw a number of gymnasts take to the floor in Ruby and Naomi Matheron, Evie Townend, Chloe Roberts, Elsa Williams, Emily Penwell, Emily Stamp, Liliana Oshodi, Asami Gynn, and Klara Qabaha. Both Ruby 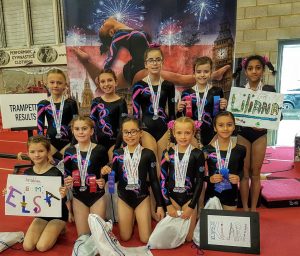 and Naomi took back medals from the trampette, Evie a bronze on the beam, Chloe still competed after breaking her finger took the 4th on the beam. For Elsa this was her first competition outside of the comfort of Arabian’s walls and she fell just outside the medals but showed strong performances on all pieces. Emily Penwell took the gold on the beam showing that beam is Arabian’s piece along with 2 silvers. Emily Stamp was just behind Emily P on the beam and took silver. Liliana took gold on the bars along with silver for vault and bronze for trampette. Yet again Klara showed her elegance on beam taking the bronze medal. Asami took 2 golds on trampette and tumble along with a bronze for her powerful vault. 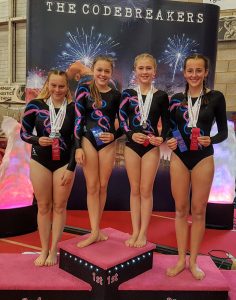 Tuck took gold on the beam along with bronze on trampette and bars and silver on tumble a good way to end her years as a gymnast.

The final round of the day saw Lyla Clark and Emily Mitchell take to the floor. Lyla took 3 bronzes along with a sliver for her trampette. Emily hasn’t long joined Arabian and competing for the first time took 2 golds for trampette and beam along with bronze for her bars.

After another successful event Head Coach Al said “It’s always nice to see such depth in the gymnasts when they compete, they held their nerve and kept a cool head and it showed. It’s always a shame when only one 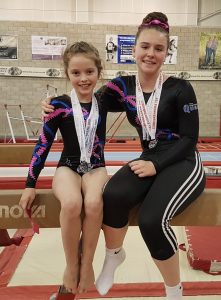 gymnast doesn’t get anything, but sometimes that’s the way of competition and it hurts to see. Thank you to all the coaches, judges and clubs that attended the event and Arabian wishes you all a Happy Christmas and fantastic New Year”

Please find attached below the results from The Codebreakers Event.